by Dr. James Meschino on 25 November 2019 in Diabetes, Cholesterol, Cancer

Ground flaxseed is unique in various ways: it contains an omega-3 fat known as alpha-linolenic acid, notwithstanding the fact that consuming flaxseed oil provides a much higher content of this important omega-3 fat. However, flaxseed also contains a unique lignan known as SLD

The health benefits of Ground flaxseed is unique in various ways: it contains an omega-3 fat known as alpha-linolenic acid, notwithstanding the fact that consuming flaxseed oil provides a much higher content of this important omega-3 fat. However, flaxseed also contains a unique lignan known as SLD (secoisolariciresinol diglycoside).

How does the breakdown of flaxseed occur upon digestion?

Upon ingestion of ground flaxseed, the SLD gets metabolized by gut bacteria and converted into Enterolactone and Enteridiol which are estrogen look-a-like compounds, classified as phytoestrogens.

Once formed in the lower intestine tract, enterolactone and enterodiol get absorbed into the bloodstream.

The same is true for isoflavones derived from the ingestion of soy products and soy-based supplements. Higher urinary excretion of isoflavones is also linked to lower breast cancer incidence in population studies.

Are there any health benefits of ground flaxseed for women?

In premenopausal women, ground flaxseed supplementation tones down the effect of a high estrogen state and thus, can be helpful in combating PMS symptoms, fibrocystic breast disease, uterine fibroids and possibly endometriosis, which are all made worse by high levels of circulating estrogen.

In menopausal women, when estrogen levels are very low, ground flaxseed supplementation has been shown to help reduce menopausal symptoms by providing some mild estrogen stimulation to target tissues.

Regarding prostate health in men, ground flaxseed supplementation has been shown to inhibit the cell division rate of prostate cancer cells in experimental studies, and in men with existing localized prostate cancer. 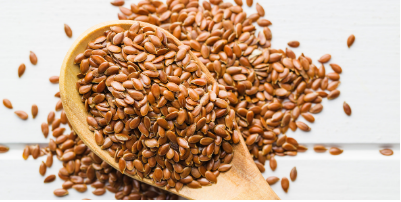 These men were also put on a low fat diet which may also have been helpful in slowing tumor growth. Another human study showed that ground flaxseed and a low fat diet lowered the PSA (prostate specific antigen)

blood level in men who followed the program. The lower the PSA, the less chance of cancer being present in the prostate gland.

Experimental studies have shown that flaxseed can also inhibit colon and skin cancers in cell cultures and in animal studies. Ground flaxseed also provides antioxidant effects and has been shown to block chromosomal damage of DNA linked to cancer in general. The key thing to know is that ground flaxseed contains 800 times more of the types of lignans that generate enterolactone and enterodiol than any other food known to man.

There is no substitute. You might want to know that other plant foods also contain lignans that are also important to human health, but only ground flaxseed contains SLD, which leads to increased blood levels of enterolactone and enterodiol.

However, other types of lignans have additional anti-cancer properties, and so the ingestion of certain grains (wheat, barley, oats), as well as beans, lentils and soybeans and other legumes, and certain vegetables such as garlic, asparagus, broccoli and carrots, are important sources of other types of cancer-fighting lignans to be aware of.

With respect to ground flaxseed, you should also know that it contains both types of fiber: fiber that lowers cholesterol and fiber that improves regularity of the intestinal tract, which is also associated with decreased diverticular disease and colon cancer.

What is the recommended dosage of ground flaxseed?

To get the health benefits of ground flaxseed, a person typically takes 1 to 2 tablespoons per day. Make sure the seeds are ground up, as the outer husk of flaxseeds is too hard for your digestive enzymes to break apart.

Thus, the only way to get access to the medicinal ingredients in flaxseeds is to ingest them only after they have been ground. I suggest you think about having a large, heaping tablespoon of ground flaxseed each day, or 2 level tablespoons, as an additional part of your wellness program.

I have included the reference to the review article in the text below if you wish to read the review first hand.