by Dr. James Meschino on 19 July 2021 in Fibromyalgia, Arthritis

Table of Contents:
Overview
Are There Any Scientific And Historical Considerations?
Does MSM Treat Arthritis and Other Inflammatory Conditions?
What is a Dosage recommendation?
Are MSM Toxic to use?
New Frontiers OF MSM Research
What Practical Application indicates?
References

MSM is a natural supplement that has been shown to have anti-inflammatory effects in many health conditions, including autoimmune diseases. It also plays an important role in supporting joint cartilage, which can be extremely helpful in preserving joint cartilage in cases of rheumatoid arthritis, ankylosing spondylitis, polymyalgia rheumatica, and other autoimmune conditions that destroy joint cartilage.

In a series of case reports Dr. Jacob compared MSM to the over-the-counter, non-steroidal anti-inflammatory drug, Motrin. Subjects in both groups reported the same degree of pain relief after one month of follow up.

Unlike Motrin, MSM does not cause stomach irritation, intestinal ulceration, internal bleeding and damage to the kidneys and liver, when taken over long periods of time. Both of these clinicians have also used MSM supplementation in the treatment of back pain.

For the treatment of a broad spectrum of pain and inflammatory conditions (non-migraine headache, fibromyalgia, tendinitis, carpal tunnel syndrome) the authors cite figures of up to 70% of patients reporting marked relief of symptoms when MSM was added to the treatment regime.

Other conditions that may benefit from MSM supplementation include rheumatoid arthritis, lupus, scleroderma and interstitial cystitis.

MSM is extremely non-toxic and when used in combination with other dietary practices and supplements that reduce inflammation and support joint cartilage, it is a valuable aspect of day-to-day management of various autoimmune and musculoskeletal conditions.

Are There Any Scientific And Historical Considerations?

MSM is a naturally occurring sulfur compound, which first arose from a complex series of reactions in the surface waters of the ocean, according to our present scientific understanding. (1)

One of the products of oceanic phytoplankton production is the compound DMS (dimethylsulfide). DMS is a volatile liquid that easily finds its way into the upper layers of the atmosphere, where it becomes oxidized (photochemically) to form a variety of sulfur compounds, including MSM and DMSO (dimethylsulfoxide). (2)

Rain of marine origin is the dominant carrier of atmospheric MSM, which provides much of the sulfur used to make biologically important sulfur –containing nutrients that we derive from plant and animal foods.

MSM’s hexavalent sulfur atom is abstracted by living organisms and is primarily used for the biochemical synthesis of many divalent sulfur-containing products.

When MSM is broken apart by plants and animals, a portion of the sulfur is used to synthesize sulfur-containing amino acids  (methionine and cystine) and another portion is used directly to produce many other biologically important organo-sulfur molecules (e.g., isothiocyanates, allicin, allyl propyl disulfide, diallyl disulfide). (3)

In this native form MSM is well absorbed and shows up in human urine with an excretion rate ranging from 4–11mg per day. (6) Maintenance levels of MSM in humans has been shown to be as low as 0.5–1.0 mg/kg of body weight per day. (7)

Thus, a person weighing 70 kg would require 35–70 mg per day of MSM, which primarily acts as a sulfur donor to repair and restore damaged covalent disulfide bonds and the sulfhydral groups of many enzymes. (8)

In this capacity, MSM is considered to be an integral part of maintaining the structural integrity of connective tissues, cartilage, nails, skin, hair, and certain enzymes, hormones, and immunoglobulins. (3)

From a therapeutic standpoint, MSM supplementation, at levels that exceed those attainable from food alone, is emerging as significant intervention in the treatment and prevention of a number of common conditions.

Thus, many holistically minded practitioners are showing a high level of interest in MSM supplementation for use as a preventive and therapeutic agent. In regards to stability, MSM is very volatile and considerable amounts are destroyed during modern day food processing.

From a historical perspective it has been argued that MSM is a chemical that has been present on earth for a very long time. During the development of higher life forms on this planet three nutrients were always present: water, sodium chloride and MSM.

As such, MSM has been shown to be a factor in the diets of our ancestors, which serves to strengthen the notion that MSM may be an overlooked and vital nutrient that is required for health maintenance.

Does MSM Treat Arthritis and Other Inflammatory Conditions?

For many years the compound DMSO (dimethylsulfoxide) has been used as a topical agent in veterinary medicine due to its well established anti-inflammatory and analgesic properties. (9)

DMSO has also been used by athletes for topical treatment of sports-related injuries involving inflammation of muscles, tendons, ligaments and bursitis problems. (10) Unfortunately, toxicity studies related to DMSO revealed that it causes damage to the lens of the eye in animals, which was reversed when DMSO was withdrawn.

Although this effect has not been demonstrated in humans, The Food and Drug Administration (FDA) was reluctant to approve its use as a therapeutic compound for humans. However, in 1978, DMSO was approved by the FDA for its use as an effective treatment for interstitial cystitis. (11, 12)

An additional drawback to the use of DMSO is the strong garlic-breath one is left with after its application. This occurs due to the fact that the body metabolizes much of DMSO to DMS. (10)

Approximately, 15% of DMSO is metabolized by the body into MSM, which does not produce the garlic-breath effect generated by DMS. (13) Unlike DMSO, MSM can be taken orally for therapeutic purposes. It is very soluble in water and is readily absorbed from the GI tract. (1, 14, 15, 16)

Animal studies have demonstrated that MSM has potent anti-inflammatory properties and can help to halt the further destruction of joint cartilage in osteoarthritis. These studies also revealed improvement in joint mobility. (17, 18, 27)

More recently, a number of human trials have been undertaken to establish the efficacy of MSM in musculoskeletal disorders. Drs. Jacob and Lawrence have conducted controlled studies using MSM in cases of arthritis.

Dr. Jacob compared MSM to the over-the-counter, nonsteroidal anti-inflammatory drug, Motrin. Subjects in both groups reported the same degree of pain relief after one month of follow up. (19)

Both Drs. Jacob and Lawrence indicate that the efficacy of MSM is further enhanced by combining it with glucosamine sulfate. (19) 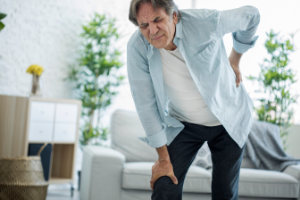 Both of these clinicians also use MSM supplementation in the treatment of back pain. For the treatment of a broad spectrum of pain and inflammatory conditions (non-migraine headache, fibromyalgia, tendinitis, carpal-tunnel syndrome) the authors cite figures of up to 70% of patients reporting marked relief of symptoms when MSM was added to the treatment regime.

Other conditions that may benefit from MSM supplementation include rheumatoid arthritis, lupus, scleroderma and interstitial cystitis. (19) Dr. Jacobs has used MSM in the treatment of more than 18,000 patients suffering from osteoarthritis and a variety of autoimmune diseases, including rheumatoid arthritis.

It is generally accepted that MSM acts to support the structural integrity of joint cartilage, provides an anti-inflammatory effect to some degree and may have mild analgesic properties as well.

The combination of these effects is thought to account for the results seen in clinical studies involving arthritic patients and patients presenting with other musculoskeletal and inflammatory conditions.

What is a Dosage recommendation?

When administered as a single treatment agent a dose as low as 250 mg per day has been shown to be effective.  Other studies have used doses as high as 2,000-6,000 mg per day. As indicated by Drs Jacob and Lawrence, it is likely best to use MSM in conjunction with glucosamine sulfate, and possibly other natural anti-inflammatory agents, to assist in the management of arthritis and other musculoskeletal disorders. (19, 20, 21)

Are MSM Toxic to use?

As for toxicity, there are naturally occurring concentrations of MSM in the human system of approximately 0.2–0.25 ppm, presumably originating from food. (22) The LD-50 in rats has been determined in excess of 20g/kg BM/d, indicating that MSM is an extremely non-toxic compound. (23)

Other animal studies of toxicity have provided similar evidence, reporting no or very low toxicity at extremely high doses. (23) In humans, MSM has been established as a safe supplement. At high doses (2-8 gms per day), some gastric upset or diarrhea may occur. (24,25)

There are no well-known drug-nutrient interactions at this time in regards to MSM supplementation. This implies that MSM can be taken concurrently with other drugs and supplements.

In animal studies MSM supplementation has been shown to prevent and delay the development of colon and breast cancer in rats treated with known chemical carcinogens. (13, 28)

This may be due to its ability to support methionine levels (helping to prevent hypomethylation of DNA, which results in fragile chromosomal linkages leading to mutations) or related more to its anti-proliferative action. (29,30) How this applies to humans at this time is not known.

In recent years a growing number of anecdotal reports have suggested that MSM supplementation is an effective, natural agent in the treatment of cartilage injury, arthritic symptoms, and other conditions.

These reports prompted a number of investigators to examine the physiological properties of MSM that may account for these beneficial outcomes, as well as safety and toxicity issues pertaining to its oral administration.

Based upon reports of clinical trials and extensive experimental studies, the risk to benefit ratio regarding the use of MSM strongly favors the inclusion of MSM into the treatment regime aimed at managing a number of musculoskeletal conditions.

Thus, MSM, in conjunction with other proven bioactive agents, is a viable treatment option for health practitioners to consider in these cases.

Diet for Patients with Rheumatoid Arthritis

Can we decrease risk of Type 2 Diabetes?

How Natural Anti-Inflammatory Supplements Benefit Us?