by Dr. James Meschino on 1 February 2021 in Cancer, Blood Pressure

Table of Contents:
Introduction
What are the Active Constituents?
Clinical Application and Mechanism of Action
How much Dosage is recommended?
Can Reishi extract cause adverse side effects and toxicity?
How Drug-Nutrient Interactions occur?
Summary
References

Reishi mushroom (Ganoderma lucidum) is called “the mushroom of immortality” in China and has been used in Oriental Medicine for over 2,000 years. (1,2) In recent years its reishi mushroom extract has been the subject of intensive research regarding their apparent ability to help prevent or treat many diseases.

The reishi mushroom grows wild on decaying logs and tree stumps in the coastal provinces of China. The fruiting body of the mushroom is used medicinally. (4)

What are the Active Constituents?

Reishi mushrooms contain a number of active agents that are known to modulate the function and improve immune system in humans. The primary agents include:
1. Specific Polysaccharides - which occur in the form of Beta-D-glucans bound to amino acids. These agents are known to possess immune-modulating and anticancer properties. (3)
2. Triterpene compounds - known as ganoderic acids, which have been shown to lower blood pressure, reduce platelet stickiness and may decrease LDL-cholesterol. (5)
3. Other major active constituents – including sterols, coumarin and mannitol. (5)

Clinical Application and Mechanism of Action

1. AntiCancer Properties:
Cancer studies in animals have shown a 50% tumor regression rate with reishi mushroom extract treatment (e.g., connective tissue cancer model in mice). (6)
Reishi mushroom extract is used by some cancer surgeons in Japan to treat cancer patients and significant anti tumor and immunostimulation effects have been noted in many of these cases. (7)
Polysaccharides from reishi mushrooms and from other types of folk-medicinal fungi are patented in Japan for use as immunomodulators in the treatment of cancer. They are combined with chemo- and radiotherapy and have demonstrated an ability to reduce side effects, increase the efficacy of treatments, and are used to accelerate recovery from disease. (8,9)
Studies from China have shown that reishi mushroom extract potentiates the tumoricidal capacity of macrophages and T-cells. (10,11) Reishi mushroom extract is known to have other immune modulating effects and antioxidant properties as well (12,13,14,15,16)
Animal studies also show that the polysaccharide fraction of reishi mushrooms can induce apoptosis (programmed cell death of cancer cells) in leukemic cells and induce cellular differentiation in 40-45% of leukemic cells treated with reishi polysaccharides, demonstrating significant anticancer properties.
These effects were primarily due to the increased secretion of anti-tumor cytokines (signaling agents) induced by reishi mushroom polysaccharides, namely TNF-alpha and IFN-gamma, and these two cytokines acted synergistically on the inhibition of leukemic-cell growth. (17) In a related experiment, the D-glucan polysaccharide fraction of reishi mushroom was shown to produce dramatic tumor regression in a mice sarcoma study.
In many animals, complete tumor regression occurred in the group injected with beta-D glucan fractions within a 5-week period. The study by Y. Sone, et al, reported tumor inhibition rates of 90% and tumor regression in 75% of afflicted animals. (18)
2. Improve Immune System: (Bronchitis, Asthma, Allergies, Herpetic Conditions and HIV Infection) 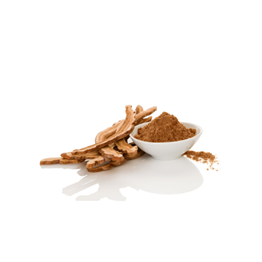 As noted above, reishi mushroom extract modulates many components of the immune system, which in part, account for its apparent anti-tumor properties.

Chronic bronchitis in the elderly has been shown to respond favorably to treatment using a concentrated reishi mushroom product in a trial involving 2,000 cases in China. This study demonstrated a better than 60% success rate.

After several months of treatment there was a noted rise in the levels of immunoglobulin A in the sputum. (10)

Immunoglobulin A is the main immunoglobulin found in the respiratory tract. A deficiency is common in allergies,(19) systemic lupus and rheumatoid arthritis. (20)
Reishi mushroom extract supplementation has been shown to help improve cases of asthma and allergies. Two constituents of reishi mushroom extract, oleic acid and cyclooctasulfur were shown to inhibit the release of histamine, which is likely how it benefits asthmatic and allergic patients. (10,21,22)
A specific protein-bound polysaccharide component of reishi mushroom extract, known as GLhw-02, has been shown to possess potent anti-viral properties against herpes simplex virus type 1 and type-2 under experimental conditions. (23)
A small human trial demonstrated that reishi mushroom extract reduced pain “dramatically” in two patients with post-herpetic neuralgia and in two other patients with severe pain due to herpes zoster infection (shingles, which is caused by a herpes virus). (24)
Under experimental conditions, various ganoderic acids in reishi mushroom extract have been shown to be active anti-HIV agents, showing an ability to reduce viral replication by 50% at conservative doses. (25)
Combined with other Oriental herbs, reishi is currently used in treatments of AIDS-related complex, AIDS, and alone or in combination formulas to treat chronic fatigue syndrome. (26,27,28)
Finally, studies on male mice reveal that reishi mushroom extract was effective in enhancing the recovery of cellular immunocompetence after gamma-ray irradiation.
Reishi mushroom supplementation significantly increased white blood cell count (leukocytes) and other parameters to improve immune system in these animals, (29) in a similar fashion as has been shown to occur with astragalus supplementation in patients treated with chemo- or radiation therapy.
Thus, the combination of astragalus and reishi mushroom extract represents an effective means of daily immune support and a therapeutic intervention for a large number of immune compromised states (e.g.,chronic fatigue, chronic bronchitis, herpes I and II recurrent infections, post-herpetic neuralgia, recurrent apthous ulcers or canker sores, the common cold, HIV infection, etc.) and for patients undergoing chemo-or radiation therapy.
3. Cardiovascular Health: (High Blood Pressure and Reduced Platelet Aggregation)
Two human controlled studies revealed that reishi mushroom extract can reduce high blood pressure to a significant degree (systolic and diastolic), even in patients who had previously failed to respond to established anti-hypertensive medications. (30,31)
Animal studies reveal that reishi mushroom extract reduces blood pressure through a central inhibition of sympathetic nerve activity, although it does not slow heart rate or induce a sedative effect in general. (32)
Under experimental conditions, reishi mushroom extract has a mild to moderate effect on reducing platelet aggregation, which may further help to decrease risk of cardiovascular disease. (33)
It has also been shown to increase endurance, blood flow to the brain and to improve oxygenation of cells. As such, it aids energy production on a cellular level, which may improve cardiovascular health and is used to boost memory and intellectual capacity in some cultures, (34) including success in a study of Alzheimer’s patients. (35)
4. Liver Protective Effects:  (Hepatoprotective Properties)
Reishi is prescribed in China for the treatment of chronic and acute hepatitis. (36)
Various ganoderic acids in reishi mushrooms have strong antihepatotoxic properties, (37) which under experimental conditions have been shown to protect liver cells from chemically-induced injury, including protection from the highly toxic and lethal substance, carbon tetrachloride. (38,39).

How much Dosage is recommended?

When used at high therapeutic doses, reishi mushroom extract has the potential to potentiate (enhance) the effects of the following types of medications, and thus requires proper patient monitoring:

Can Reishi extract cause adverse side effects and toxicity?

Side effects are infrequent and include dizziness, dryness of the mouth, throat and nasal areas, stomach upset and loose stools. (41)

Reishi mushroom contains agents that may be allergins to some patients, although allergic reactions are rare. (42)

Note that there is no cross–sensitivity to the reishi mushroom if a person is allergic to the Button Mushroom or the commonly eaten white mushroom that is found in most grocery stores. (35)

In general, reishi mushroom has been shown to be very non-toxic in animal toxicity studies and in humans, even when used at high therapeutic doses. (3)

When used at high therapeutic doses, reishi mushroom extract has the potential to potentiate (enhance) the effects of the following types of medications, and thus requires proper patient monitoring:

In Asia, herbal agents such as reishi mushroom extract and astragalus have been used, alone or in combination formulas, to improve various parameters of immune function, treat a variety of immune-compromised states, increase the white blood cell count in patients recovering from drug toxicity, chemotherapy and radiation therapy, and provide effective complementary support for HIV and cancer patients.

Recent experimental studies and intervention trials have helped to substantiate the longstanding traditional use of these natural agents and as well as to confirm their safety profile and lack of toxicity.

As it is known that the human immune system becomes weaker and less efficient as we age, it seems reasonable that natural health practitioners would introduce measures to help their patients reduce or halt the age-related decline in immune system function; that appears to partially explain the rising cancer incidence that occurs as we age as well as our increased susceptibility to more virulent and life-threatening infections (e.g., Pneumonia).

In this regard, antioxidant supplementation has shown a remarkable ability to forestall age-related changes to the immune system and to reverse many aspects of immune function in subjects showing some decreased immune capabilities.

In concert with this intervention, the use of herbal compounds containing immune-modulating polysaccharides and other active constituents, such as reishi mushroom extract and astragalus, represent a potent means through which to further improve immune system and help patients prevent and treat a significant number of chronic degenerative diseases and reverse certain aspects of the aging process; especially in regards to immune, cardiovascular and liver function.